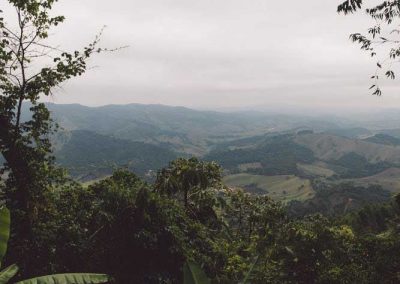 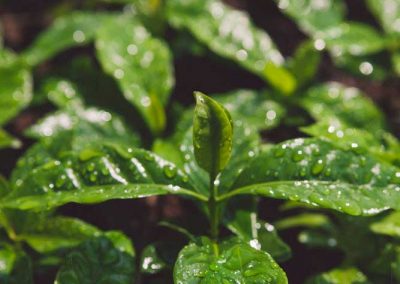 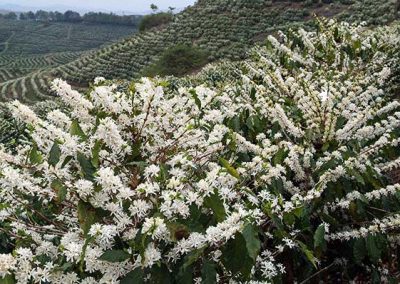 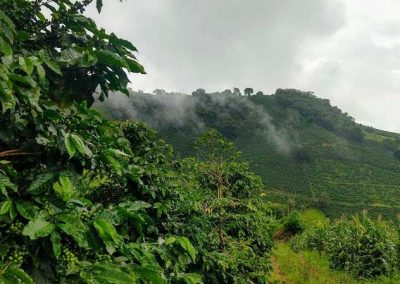 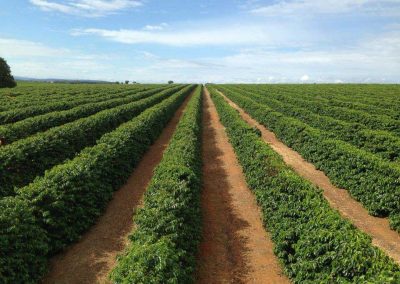 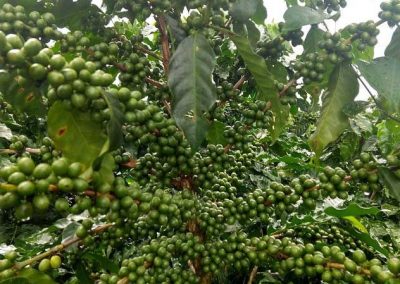 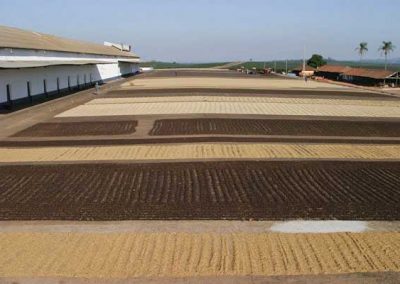 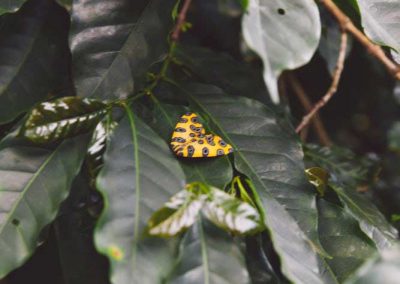 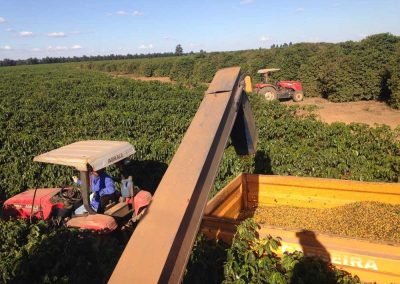 Just under 40% of all coffee in the world is produced in Brazil – around 3.7 million metric tons annually. With so much coffee produced, it’s no wonder that the country produces a wide range of qualities. Brazil produces everything from natural Robusta, to the neutral and mild Santos screen 17/18, to the distinctive Rio Minas 17/18. In recent years, Brazilian producers have also begun investing more heavily in specialty coffee production. Through our supplier’s in-country partners in Brazil, we are able to provide a wide range of Brazilian coffees: from macrolot to microlot.

History of Coffee in Brazil

The Backstory to Coffee in Brazil

The story of how coffee was first introduced to Brazil is one of subterfuge, seduction and intrigue. In 1727, Francisco de Melo Palheta, a Lieutenant-Colonel in the Brazilian army, was commissioned by the Portuguese government (who ruled Brazil at the time) to steal coffee from the French, who had several nearby colonized-countries growing coffee (and had refused to share). When Brazil was asked to intervene in a border dispute in French Guiana, a country that borders the northern Brazilian state of Amapa, Palheta was sent to deal with the dispute….and steal a viable coffee seed!

After Palheta successfully arbitrated the dispute, he asked the colonial Governor of Cayenne for a sample of the governor’s coveted coffee plant. The governor refused, seeking to maintain the monopoly France had on coffee plants in the Americas. Palheta, according to legend, skirted this problem by seducing the governor’s wife. When Palheta was set to depart French Guiana for Brazil, his paramour gifted him a bouquet of flowers that had coffee beans hidden within it. The rest, as they say, is history.

In just a century, Brazil established itself as the largest producer of coffee in the world. In the 1830s, coffee became Brazil’s largest export and accounted for 30% of global production. Within a decade, Brazil had become the largest coffee producer in the world and produced 40% of total coffee grown worldwide.

Another ‘boom’ in coffee production volumes occurred from the 1880s to 1930s. At this time, Brazilian politics were controlled mainly by the agrarian oligarchs in São Paulo and Minas Gerais. This political period was called café com leite (coffee with milk) because the major money-makers in São Paulo and Minas Gerais at that time were coffee and dairy, respectively. During the café com leite period, the people who owned the large plantations in these two regions had a lot of political clout and were able to institute laws that made production and export faster, cheaper and easier.

As in so many other coffee growing countries, early coffee production in Brazil (and many other countries) was dependent on slave labor. When slavery was finally abolished in 1888, landowners finally had to pay the piper.

During the latter half of the 19th century, the lure of jobs and wealth from coffee plantations attracted millions of immigrants to coffee growing areas. During this time, São Paulo’s population grew from 30,000 people in the 1850s to 240,000 people by 1900.

Especially in São Paulo, which was the largest and wealthiest coffee-growing region in Brazil at the time, many of the jobs these immigrants found were as laborers on coffee plantations. Fueled, in part, by this labor influx, Brazil was producing 80% of the global coffee supply by the 1920s and had close to monopolistic control over the international coffee market.

Over time, as other countries began increasing coffee production, quality and export, Brazil’s market share fell. However, today, Brazil is still the largest producer of coffee and accounts for approximately 40% of global production. It’s closest competitor, Vietnam, produces a harvest that’s barely half the size of Brazil’s.

Today, the most prolific coffee growing regions of Brazil are Espirito Santo, São Paulo, Minas Gerais, and Bahia. Most Brazilian coffee is grown on large farms that are built and equipped for maximizing production output through mechanical harvesting and processing. The relatively flat landscape across many of Brazil’s coffee regions combined with high minimum wages has led most farms to opt for this type of mechanical harvesting over selective hand-picking.

In the past, mechanization meant that strip-picking was the norm; however, today’s mechanical harvesters are increasingly sensitive, meaning that farms can harvest only fully ripe cherries at each pass, which is good news for specialty-oriented producers.

In many cases and on less level sections of farms, a mixed form of ‘manual mechanized’ harvesting may be used, where ripe coffee is picked using a derriçadeira – a sort of mechanized rake that uses vibration to harvest ripe cherry. A tarp is spanned between coffee trees to capture the cherry as it falls.

With the aid of these newer, more selective technologies, there’s a growing number of farms who are increasingly concerned with – and able to deliver – cup quality.

Early coffee production was focused mainly in Pará, Rio de Janeiro, Minas Gerais and São Paulo. Since these regions experience significant water scarcity, most coffee in Brazil in the 19th and 20th centuries was processed using the Natural method.

In more recent times, growing interest in new flavors and a more competitive market has led many producers to offer other processes including Honeys, Fully washed and newer, experimental processes like Anaerobic fermentation. Some estates have found a new niche by processing the same harvest using several different processes. The appeal of a single harvest processed in different ways is that it allows consumers to experience the effect of processing on flavor more clearly.

Due to Brazil’s significant share in global production, any changes in annual harvest size can drastically impact world coffee prices. When Brazil produces a large harvest, oversupply can drive coffee prices down. Similarly, when Brazilian harvests are unusually low—such as in years when severe frosts kill many coffee trees—global prices can increase due to a lack of supply to match global consumption.

Amongst the major coffee producers, Brazil is the only country currently vulnerable to severe frosts. Historically, severe frosts have affected harvests every 5 to 6 years.

Less severe frosts, commonly called white frosts, can impact a year’s harvest by killing the flower buds that later grow cherry. But the impacts of severe frosts resonate across several years because these frosts kill the entire tree. After a severe frost, farmers must replant most of their trees with new saplings. Young trees take 3 to 4 years to reach commercial production, so areas hit by severe frosts often have extremely small harvests for as long as 5 years following the event.

Economic events in Brazil can impact the global coffee market as well. Because of Brazil’s predominance as a coffee producing nation, fluctuations in the value of the Brazilian Real can significantly influence coffee prices.

As mentioned previously, the early coffee economy of Brazil was in some ways reliant upon exploitative working conditions. Though true for many coffee producing nations, Brazil has been visited by ghosts of its laboring past, perhaps more than others. Child and slave labor remain a concern.

Brazil has made great strides in recent years to move as far as possible from its previous labor history. Over the past 30 years, the country has implemented some of the most progressive and strict labor laws of any coffee-producing country. They have also raised a comprehensive campaign, across sectors, to eradicate modern slavery. Great efforts that have been made to make the supply chain in Brazil fairer and more equitable.

Solving this problem also relies upon every stakeholder in the coffee industry remaining vigilant. We fully support the Swiss commodity sector guidance on implementing the UN Guiding Principles on Business and Human Rights. To this end, we work closely with suppliers who share our values and who are able to prove that they follow all national labor laws.

Credit: Origin Educations are courtesy of our supplier, Sucafina Specialty.